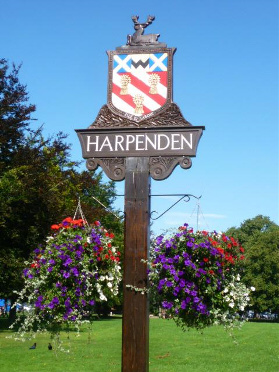 Clearly any report on issues of health and wellbeing, in Harpenden or further afield, are totally overshadowed at present by the Covid-19 emergency, where the Town Council – with the involvement of local organisations such as the Harpenden Society – has initiated the establishment of the ‘Harpenden Cares’ movement to help those with particular needs.

Until the current emergency burst upon us, the Society’s Health & Wellbeing group’s main focus had been on the longstanding (and repeatedly revised and delayed) Red House proposals, under which the former Harpenden Memorial Hospital buildings in Carlton Road are due to become transformed into a new multi-purpose Health Centre.

From last April provision of adult health community services in Hertfordshire were taken over, amid some controversy, by the Central London Community Healthcare Trust (CLCH). At a public meeting in September, held by Herts Valley Clinical Commissioning Group (HVCCG), the subject of a detailed report in the Harpenden Society’s Autumn newsletter, a CLCH director expressed confidence that the new centre would be completed by early 2023. That now appears optimistic, in the light of present health-related circumstances.

Some better news however is that in September Luton & Dunstable Hospital, after many years of planning, was granted £99.5 million capital allocation to build a new five storey acute services block housing a greatly-expanded Neonatal Intensive Care Unit with new operating theatres and the provision of upgraded critical and maternity care.

The Harpenden Society have for many years, been leading the campaign to ensure that the Red House site is developed with an ongoing medical service for the Harpenden community. And in support they established the Red House Forum in 2012, a ginger group with across-the-board membership, to steer the campaign. Key organisers, still active being Chris Marsden, former Harpenden Society chair, as chairman, with Eric Midwinter and Cllr Teresa Heritage.

This saga shows no sign of resolution despite promises from various NHS providers in the last decade. The Covid pandemic is of course a legitimate reason for delayed action of significance so it is worthwhile to remind ourselves at how we arrived in the current situation. The last 3 years have been traumatic.

The owners of the site Hertfordshire Community NHS Trust (HCT) finally presented their plans for a redevelopment of the whole of the existing Harpenden Memorial Hospital site. They would create a new Health and Wellbeing Centre in the existing Stewarts building (ready for use’ by late 2020) funded by the sale of the remainder of the site for a new housing development and the Red House building being converted into apartments..

The future of the Red House development (including the Health and Wellbeing Centre ) was thrown into doubt by fundamental changes in NHS operating structures. Ownership of the site was transferred to Central London Community Healthcare Trust (CLCH) as the new provider for adult community health services in west Hertfordshire from the Autumn.

CLCH announced that the planned opening of Harpenden’s Health & Wellbeing Centre would now be delayed until 2023. As the new guardians of the site they have had to assess all the previous work by the Hertfordshire Community NHS Trust, much of it complex, before rationalising and submitting their plans and budgets to Government. The revised plans were due for approval in 18 moths time ( March 2021) with the opening now planned for 2023.

They are reviewing the whole concept proposed by HCT including using the site for house building.

They presented us with floor plans of the Red House building to show Phase 1 of the upgrades which will allow for additional services such as Podiatry, Tissue viability, Bladder and Bowel to be introduced, subject to internal sign off. Works were due to start in early March 2020 and they hoped to complete phase 1 by June.

Further information on the critical development of medical services will be advised going forward. The COVID pandemic curtailed most of the activity and all communication during the year.

Email contact was made with the Capita contact as per Dec 2019. They advised that the Covid difficulties had caused delays but some progress had been made in the areas we have upgraded. The Main Red House building is currently rolling out the Vaccine to NHS staff & Care Home Staff, and CLCH NHS Trust have continued to carry out the upgrade works to the building so this is ready for the services once we are able to stand this back up.

CLCH have to date in the Red House:

The main corporate management team have now relocated into the 1st floor, with additional transformation plans to be rolled out when it is safe to do so. The Stewarts is now owned and managed by another NHS Trust - Hertfordshire Mental Health trust so it does not feature directly in their plans.

A letter (dated 22nd August 2012) sent from the Society’s Eric Midwinter to Teresa Heritage and David Law about the future of the Harpenden Memorial Hospital can be found here.

A Harpenden Society proposal for the future of the Red House (The Red House Revivified) can be found here.